My favorite travel souvenirs are vintage clothes. Every time I travel I try to make a list of vintage stores to check in the city I’m visiting.

This House of Branell dress was not bought on a trip but because of a trip. Mainly. I also have a soft spot for gold lurex and could not resist the fact that I could own a dress by the same designer house responsible for Grace Kelly’s engagement dress. I used to be a big fan of Princess Grace when I was a kid, I still recall my eleven year old self writing a diary entry on the car crash that killed her because I felt truly sad about her death. 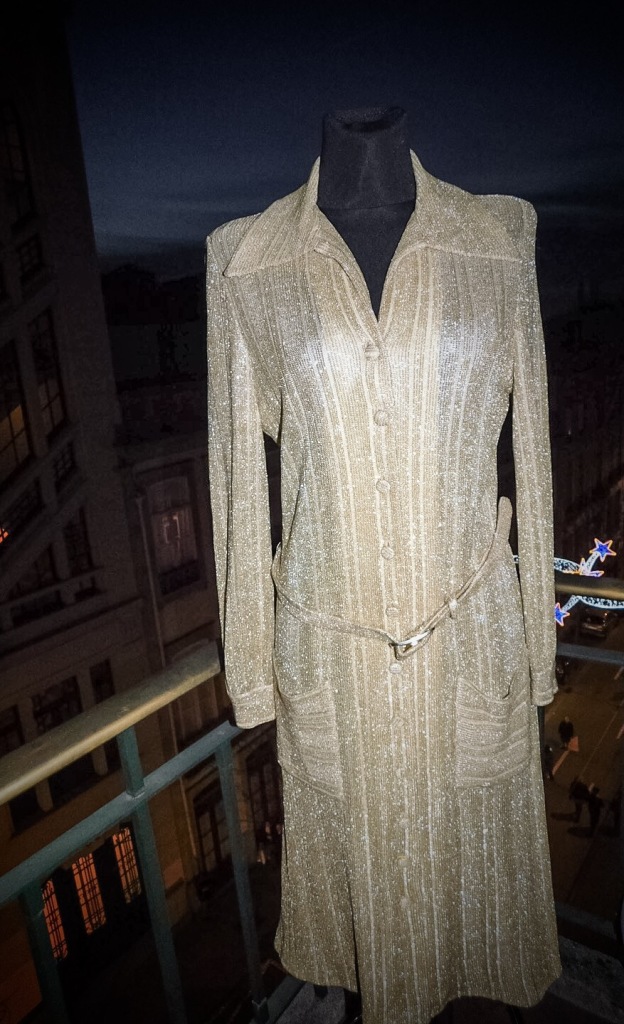 The main reason why I bought this dress was that this is a House of Branell for Gus Mayer dress. Founded in 1900, the original Gus Mayer department store was located on the corner of Canal and Carandolet Streets in New Orleans. I think the building now houses a CVS pharmacy where I bought a purple umbrella in August 2012. 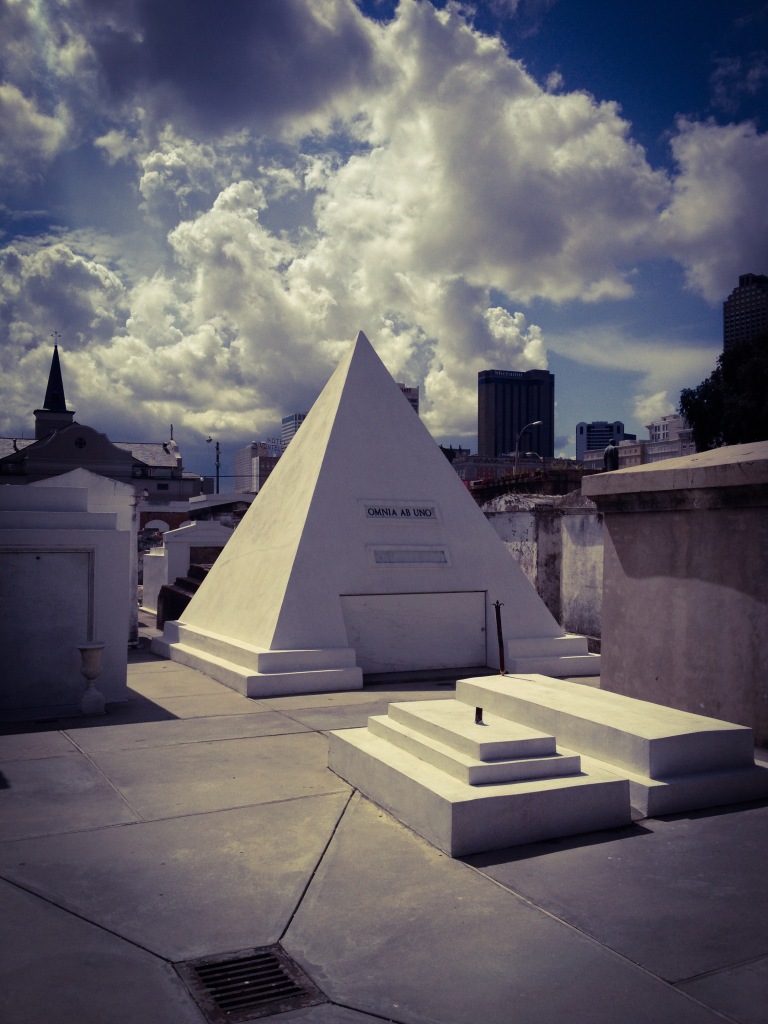 New Orleans was one of those “bucket lists” trips; I dreamt of going, I fantasized about living there and riding streetcars up and down said Canal Street and finally made it there on a spur of the moment unplanned week long vacation thanks to last minute deals on airfares and booking.com. I still have to make it both to Mardi Gras and the Jazz Festival ( my bucket lists keep growing). 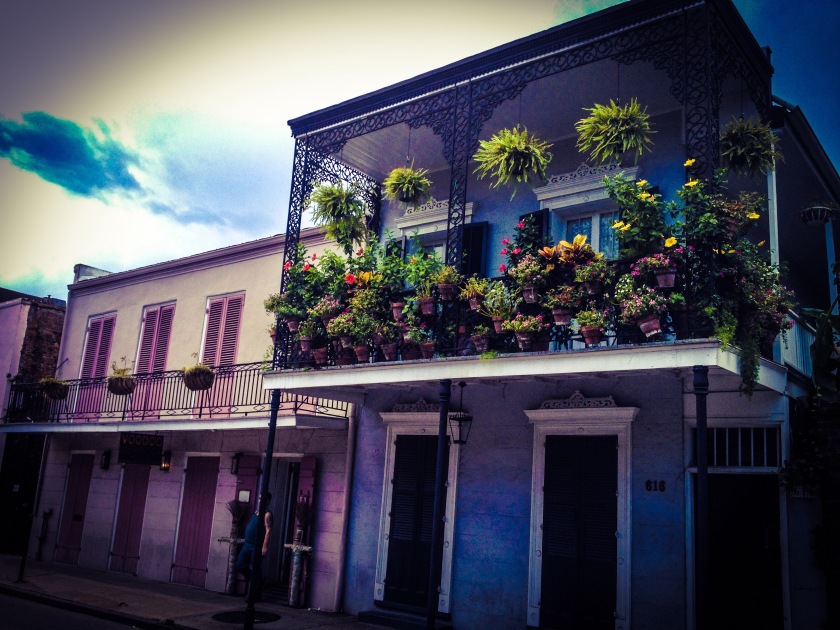 I was in New Orleans in August and that probably explains why I managed to stay at the Royal Sonesta for a fraction of the normal price; not everyone enjoys extreme heat and humidity which seems to be my favorite kind of weather. Still, for a week, I enjoyed New Orleans on my own, which undoubtedly contributed to a very intense and emotional experience of the city, I was even serenaded by Jay-Ray & Gee who sang Chuck Berry’s Nadine to me on Royal Street in the rain, just after I bought the purple umbrella. 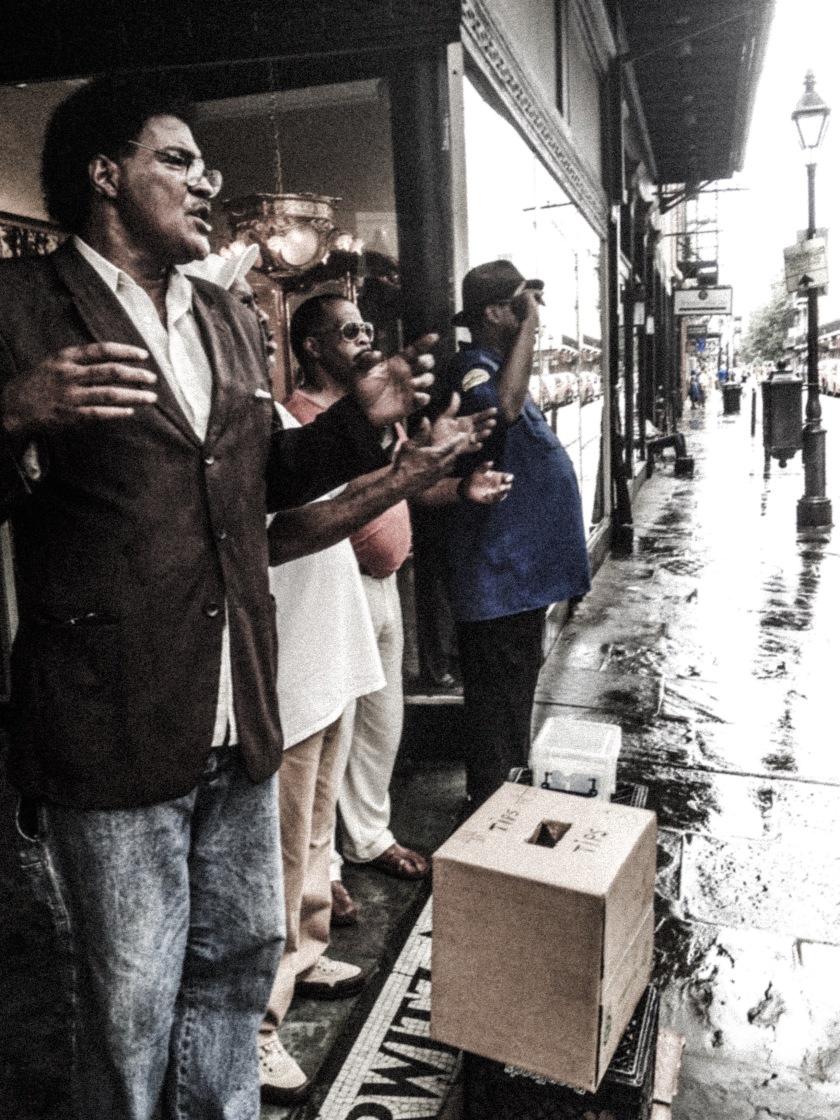 Everything I experienced during that week, from daydreaming at Maskarade, to walking the corridor to Preservation Hall, to the aftermaths of Katrina in the form of an exhibition at The Presbytère, to entering William Faulkner’s house, to the beignets at Café du Monde, to the cooking lesson and cemetery tour and the very special music tour with a group of tour guides, to the delightful accent and politeness of everyone I met to the simple fact that “going home” for a whole week meant heading to 300 Bourbon Street, all this made me buy a gold lurex dress. 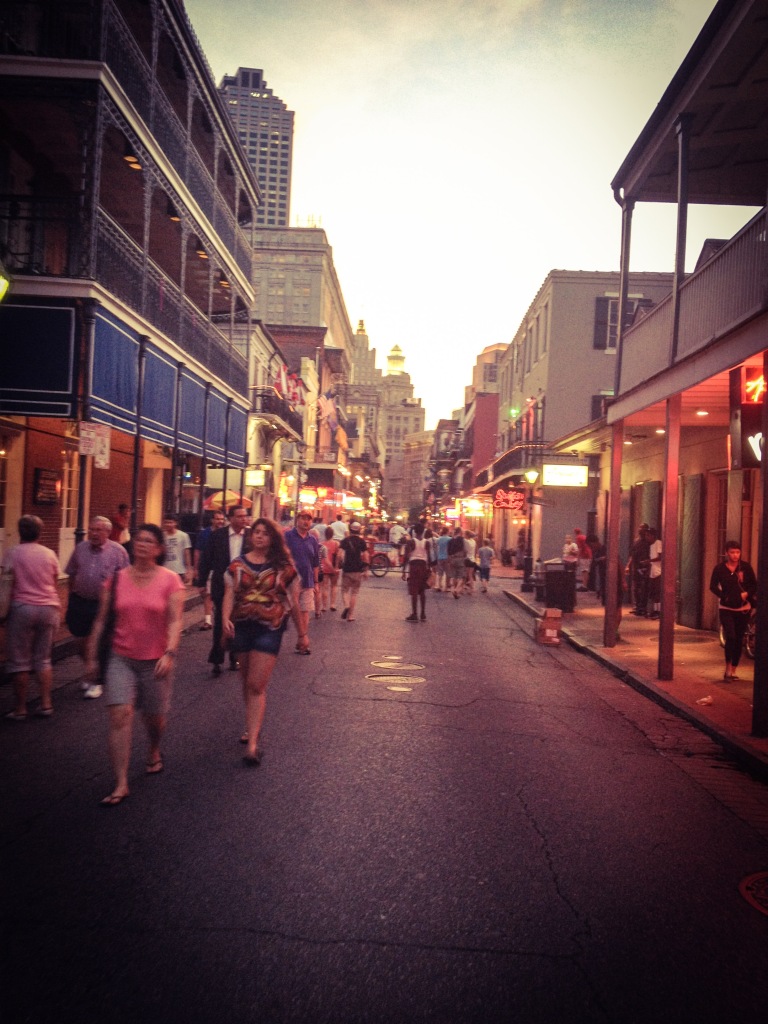 In a way, it embodies all the feelings of longing to go back and the wild plans of ditching normal life and reinventing myself as an apprentice voodoo priestess or a sultry Jazz singer and having my own luxurious fern covered balcony.

Time to let it go because, as with so many of my errors, it does not fit me as gloriously as it will a curvier lady. 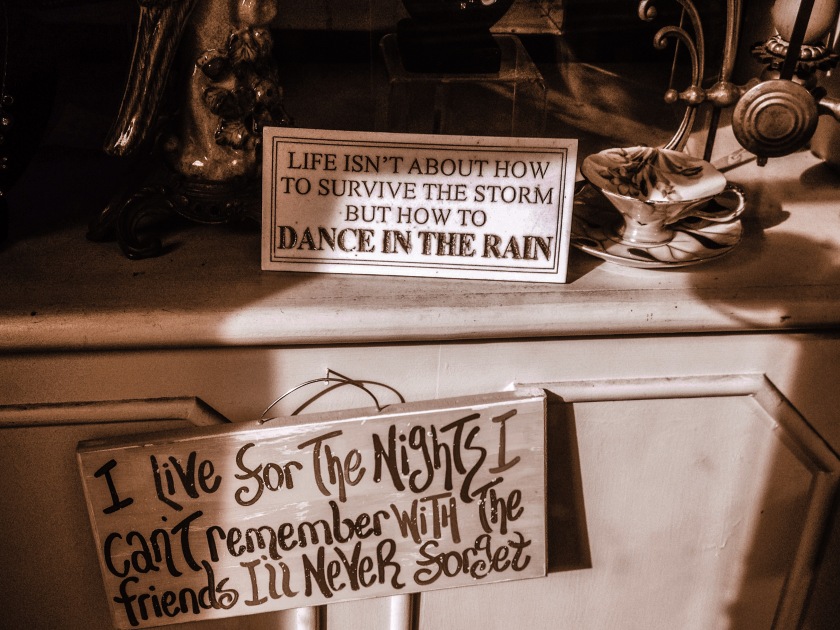 Gus Mayer photo via Louisiana Digital Library; all other photos are my own 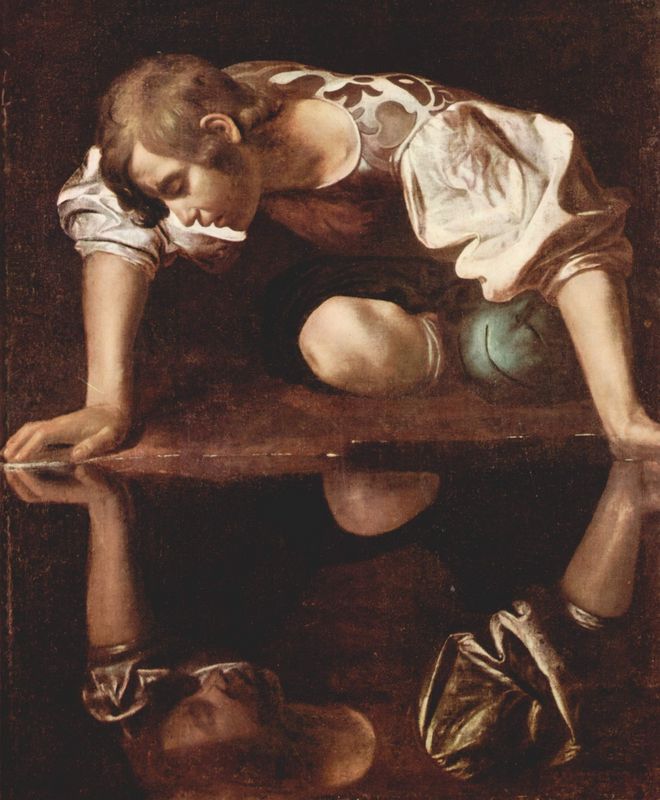 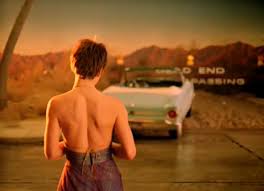 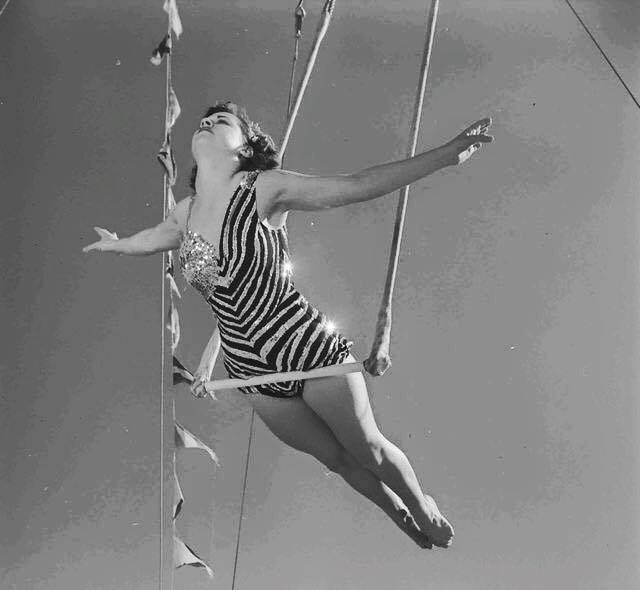 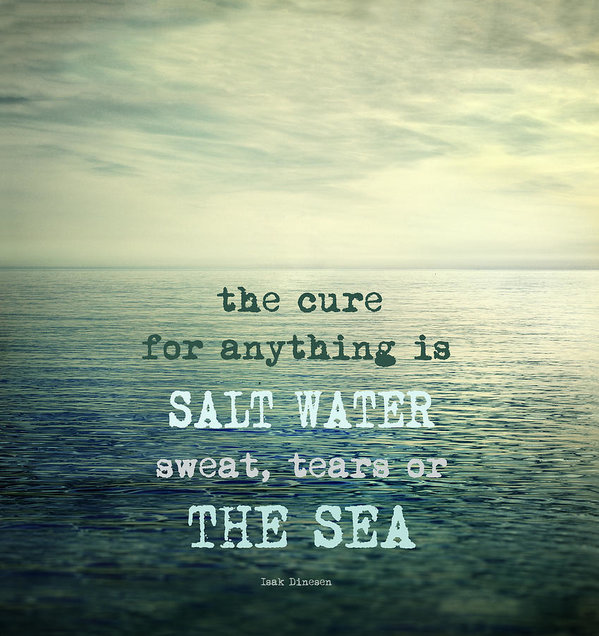